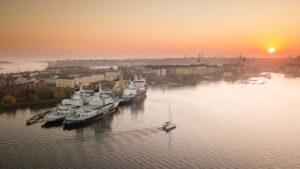 In this publication ProMosaik Children introduces the readers to the world of Finnish Tales and Fables. They can be read by children as well as by adults.

Here was once a man who was poor and lazy and he had a wife who was even worse. Her name was Jenny. Jenny was so lazy that it was an effort for her to lift one foot after the other. And in addition to her laziness she was an everlasting complainer. “Oh!” she used to grunt in the morning, “I wish we didn’t have to get up!” and “Oh!” she used to groan at night, “I wish we didn’t have to take our shoes off before going to bed!”

One day when they were both out in the forest collecting faggots, Jenny said:
“I don’t see why we’re not rich! I don’t see why the King should live at his ease while we have to grub for everything we get! I just hate work!”
Of course the trouble both with Jenny and her husband was not that they worked but that they didn’t work. It was because they didn’t that they had so much time to think about it.

“Drat it all!” Jenny went on, whining, “Adam and Eve are to blame for all our misfortunes! If they hadn’t disobeyed God’s commandment and eaten that apple, we’d all be living in the Garden of Eden to this day! It’s all their fault that we have to moil and toil and hurry and scurry!”

“Yes,” the man agreed, “it is, especially Eve’s. Of course Adam was to blame, too, for he should have controlled his wife better. But Eve was the more to blame. If I had been Adam I shouldn’t have allowed her to touch the apple in the first place.”
Now it happened that the King who was out hunting that day overheard this conversation.
“Ha!” he thought to himself, “I’ve a great mind to teach these two people a lesson!”