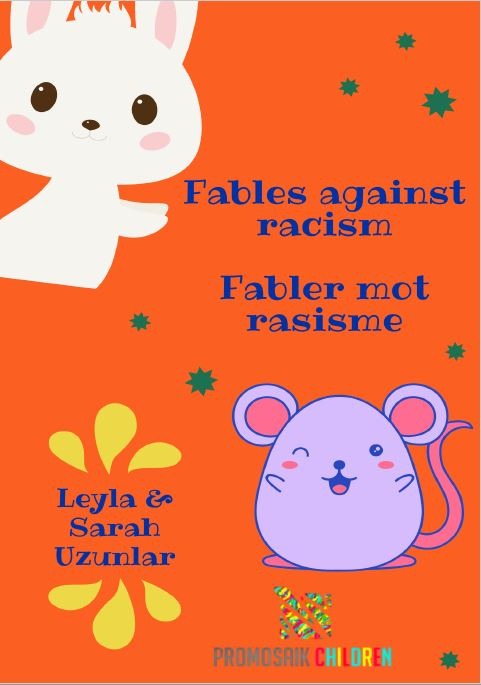 Children, who love fables in which animals have human traits, also love inventing new fables. Such fables, however, must also have happy endings. And if fables about racism are to be told, then they too must have happy endings with the racism being eradicated within one or two pages.

With these five fables included in the STOP RACISM series — FABLES AGAINST RACISM — ProMosaik would like to promote the concept of a world without racism. The fables were written by two children from Istanbul, living within a bicultural Italian and Turkish environment.
The fables published in this booklet would like to share a powerful message for dialogue and engagement against racism and discrimination which occur within all social, cultural, and religious groups.

In our first edition of 2017, we decided to translate the fables into eleven languages to get a constellation of six European languages (Italian, German, English, French, Spanish, and Greek) and six languages from the Muslim world (Turkish, Kurmanji-Kurdish, Arabic, Persian, Paschto, and Bahasa).

We believe that in this context the fable will be the ideal literary form to promote intercultural dialogue because it is strongly anchored in the European culture with Aesop and Phaedrus, while the Islamic culture has acquired the treasure of the Indian fables of Kalila and Dimna through their translation from Sanskrit into Persian and Arabic.

This new Norwegian edition pursues the same aim and is addressed to all Norwegian children.

Adults sometimes do not understand the importance of tolerance, peaceful cooperation, dialogue, and intercultural collaboration. So, we would like to give children the opportunity to tell us a fable in which animals decide not to make fun of others because they are different…