By Milena Rampoldi, ProMosaik, 18 July 2022. Here in the following my interview with the author Christine Labrige. ProMosaik LAPH recently published her trilogy entitled “Irya and the Great Flood”. It is a historical novel about the past epoch of Old Europe, or the so-called Danube culture.

Here you can find the presentation page of the novel. 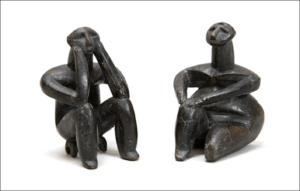 What is the story behind this trilogy?

For many years already I have been fascinated by the imagery that archaeologists brought to light on the excavation sites in southeastern Europe, in the regions where the Old European civilisation once flourished. I had studied the books by Marija Gimbutas about this ancient civilisation, and the richness of the ancient art simply got to me. There are so many different styles  and designs, and decorative motifs. I sensed the symbolic spirit of the major motifs such as the spiral, the serpent and the lozenge.

What impressed me in quite another way was that few people seemed to take notice of the heritage of this rich culture. This heritage has been broadly documented but it seems people do not really know how to identify with Old Europe because this ancient civilisation does not form part of the traditional canon of our school education. I think this is not right, and I have been preoccupied with this public negligence of something as precious as the world of Old Europe.

I was looking for ways how to address people and draw their attention to the rich cultural heritage that Marija Gimbutas had highlighted. I felt, I got stuck with my aspirations and I could not find any clue how to reach higher ground. And then my attention was attracted by something that, at first sight, did not have anything to do with Old Europe. That was the discovery of the Black Sea flood in the 1990s when William Ryan and Walter Pitman published their book “Noah’s flood” (1998). It was a revelation for me to learn that the myth about the Great Flood actually was a reflection, in people’s cultural memory, of a real event in the history of the region.

At the time when the mighty glaciers of the Ice Age melted down and the sea level in the Atlantic and the Mediterranean started to rise, there still was a land bridge connecting Asia Minor with the European continent. Then, the Black Sea was an inland fresh-water lake. Once the sea level on the southern side had risen further there came a moment when the land bridge broke, and the former lake was buried under mighty streams of sea water. Many coastal areas were flooded, and in some of those areas that were covered by the flood, there had been settlements of early agriculturalists. The people who once lived there and managed to survive had to leave their former homesteads and flee.

And then a special information struck me, and that was a date that archaeologists had established for cultural development in Europe. The date, set at about 6500 BCE, was something magical. It said that before that time cultural development had unfolded in a moderate pace. But the date marked a significant change. After 6500 BCE the pace of development accelerated and became swift, and swifter than in Asia. And the most important revelation was that this same turning-point date was given for the event of the flood. All of a sudden, the veil vanished that had been closed before my eyes and had blurred my sight, and I saw the light, in other words: I suddenly got a grasp on things.

The survivors of the flood went through an ordeal and were left with a traumatic memory of what had happened to them. They left the area of the flood and migrated to safer places. Those were people who had been mobilised to endure and they were ready to start anew somewhere else. This means those people were highly motivated to rebuild their homes in new surroundings. From the scholarly investigations I learned that some groups went into the valley of the Danube river and moved upstream. And on the banks of the river they founded new settlements. Those settlements grew into the hub of the Old European civilisation.

I was thrilled with these insights and thought of ways to communicate these new visions to a wider audience to speed the news about the beginnings of cultural history in Europe. I spent many sleepless nights pondering about what would be a proper approach to achieve enlightenment. And then came a moment when I felt some decisive impulses that moved my senses, giving way to a feeling that demanded action. And all of a sudden it was clear to me what I had to do: writing an historical novel …

I made much effort to internalise the mindset of the survivors of the flood and how they might have found comfort by activating their communal spirit. And then I looked for someone with whom I could identify and slip into her role as protagonist. And there she was: Irya.

For me the choice of the name Irya has much to do with the impression I got when I tried to get a feel for the language the ancient Europeans had spoken.

I tried to get a grasp on what scholars have found out about that language which obviously was not akin to the language of the steppe people who later migrated to southeastern Europe. One thing that impressed me in connection with historical-linguistic studies is the insight that language is a mirror of people’s ways of life and of contacts between different cultures.

Loanwords in particular may document culture contacts that occurred hundreds and even thousands of years ago. The language of the ancient Europeans was spoken many thousand years ago, and its traces are still reflected in the linguistic borrowings of ancient Greek. Words like eirene “peace”, psyche “psyche, spirit, soul” or metallon “metal” look like Greek but in fact they are borrowed from the language of the people in Old Europe. There are hundreds of such borrowings. And from these words linguists can reconstruct the sound structure of that very ancient language.

I tried to choose a name for my protagonist that is in concord with the sound structure of the ancient language, and Irya is what I came up with. In my ears this name simply sounds right.

Tell us something about the relationship between the male and female gender in the novel?

From the writings of Marija Gimbutas I get the idea that the essence of humanity was different in Old Europe from what we are accustomed to. We have lived with social hierarchy and power play since antiquity, and many think that has always been like that. The model of society in the Old European communities was truly different.

There was no distinction of social classes, and there were no kings, dictators or tyrants who would have dominated others and would have told them what to do. And Old European society offers comfort to women. There was a time when men and women were members of society on equal terms.   The people of Old Europe achieved high living-standards because men and women were partners who acted in a cooperative spirit. It is truly comforting to know that there was a time in cultural history which was enlightened by social equality for women. Indeed, the history of gender equality starts with the social conditions in Old Europe.

This fascinating insight from feminist studies sparked my motivation to stage the fundamental values of an egalitarian society with gender equality for my story. Irya takes the role as a leader, but this role is not gained as the result of power play. On the contrary, Irya is assigned authority by the villagers because of her skills and determination to lead the survivors to safety.

Irya acts as a guide for those who try to escape the turmoil of the flood event. And she becomes the ancestress of a new generation of settlers who built up the communities of Old Europe in the Danube valley.

Could we say that this trilogy is a historic-philosophical novel? How far is this true, and in what sense is it not?

My story is an historical novel because I try to breathe life into social interaction of people in a remote age, in an environment that is dramatically changing. I try my best to reconstruct social conditions of everyday life in concord with the findings from interdisciplinary research. This is a saga about major changes of eras in the history of humanity, and about the beginnings of a new era when a new world emerged, the cultural horizon of Old Europe.

Looked at from a different angle, my story is a philosophical novel since the varying conditions of social interaction and the functioning of fundamental values are analysed, especially from the standpoint what impact these factors have on everyday life. And the significance of fundamental values which we all need for our well-being is ageless.

How can novels like this contribute to the mediation of historical and religious-historical contents?

I can only hope that readers take interest in the sequence of dramatic events, as they are told, and that they become curious to find out more about this mysterious world of Old Europe that is emerging. And, above all, I am hopeful that readers are touched by my way of story-telling and that they get the impression: the characters of the plot are very much alive and the saga will occupy a special niche in readers’ memory.