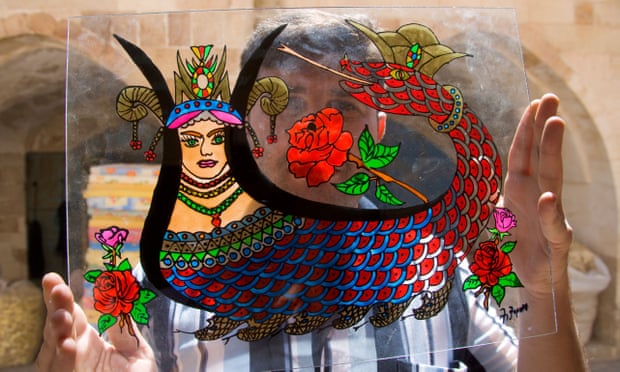 This book draws on the rich folklore of Turkey. Forty-four Turkish Fairy Tales is long out of print, for reasons which will become clear below. For one thing, this edition had lavish production standards: it is in an oversize quarto format, with gold deckling, about ten inches in height.

It has two-color printing on every page, and 16 tipped (i.e., hand-glued) four-color plates. On the used market, mint copies of this book normally run in the high three figures. We obtained a well-loved (and nicely rebound) copytext for this online edition through interlibrary loan from Northwestern University Library. Most of these stories are framed by the usual fairy tale apparatus. There are quests to win the hand of a princess, evil step-relations, talking animals, magical objects and transformations, simple (but brave) peasants, wizards and witches, dragons and dungeons, thousand-league journeys, and loveable fools. The majority of these stories contain encounters with Turkish supernatural beings. These are called ‚Dews,‘ known elsewhere in Islamic folklore as ‚Devis,‘ or ‚Jin,‘ Europeanized as ‚Genie.‘ (Sometimes in this book, the Turkish Dew are also called ‚Arabs!‘)

These most resemble the giants of European folk tales, with elements of the fairies. The Dews are, more often than not, malevolent towards humans, although they occasionally help the protagonist in their quest. There are many other specifically Turkish elements and terminology in the stories, for which note the helpful glossary at the end of the book. So this isn’t simply an orientalized set of European Märchen, but apparently drawn from an authentic Turkish oral storytelling tradition. However, there is no attribution of source for any of these stories; this is not a scholarly study by any means. As is usual with the fairy tale genre, not all of the story elements are ’suitable for children‘: e.g. beheadings, sacrifices, anthropophagy.

A publication by ProMosaik Children.